Edit this page
watch 02:52
'World of Warcraft: The Burning Crusade' Cinematic Trailer
Do you like this video?
Play Sound

World of Warcraft: The Burning Crusade (aka TBC), the first expansion for World of Warcraft, was announced on October 28th, 2005 and released on January 16th, 2007 in North America, Europe, and Australia, February 2nd, 2007 in Korea, April 3rd, 2007 in Taiwan and Hong Kong, and September 6th, 2007 in mainland China. The main features include an increase of the level cap, the introduction of the blood elves and the draenei as playable races, and the addition of the world of Outland, along with many new zones, dungeons, items, quests, and monsters.

On June 28-29th, 2012, this expansion was made available free for owners of the original World of Warcraft game.[1]

In preparation for The Burning Crusade, Blizzard released patch 2.0.1 in North America and Europe on December 5th, 2006. The patch introduced some of The Burning Crusade's content prior to the expansion itself — including a revamp of the honor system, skirmish Arena matches, and a new Looking For Group interface.

The expansion was released in standard as well as Collector's Edition packages. The Collector's Edition of The Burning Crusade includes a bonus Behind-The-Scenes DVD, an in-game Netherwhelp pet and many other exclusive extras. Installing the expansion does not break backwards compatibility — players are still able to log on to non-BC accounts using The Burning Crusade client.

System requirements for both editions remained virtually unchanged compared to the original World of Warcraft, with the notable exception of the increase in the required network bandwidth (from 56k dialup to a "broadband connection"). Blizzard has stated that the change was due to the size of the future patches, and that it will continue to offer tech support to players with dial-up, except for patching issues.

The quests in The Burning Crusade are generally set in continuity with original lore quests, meaning that timeline speaking, BC is basically the direct sequel to the original WoW. Some quests set in Outland, especially those that are related to Illidan, do speak of a five-year hiatus in the storyline, which suggests a one-year long interval between BC and the original. This is however unconfirmed, since there never was any real statement that TFT takes place one year after RoC. But generally agreed, there was a four year break between Warcraft III and WoW.

The expansion is primarily based in Outland, the former world of Draenor and the new continent in the game. Quests generally allow players to explore the world on their own. The main story centers on Illidan the Betrayer and what happened to him during the last years. Players can also go on quests that suggest helping Illidan in his time-being or slaying him for a special reward.

Other than that, many links between the former world of Draenor and the current Outland are also made, such as the opening of the Dark Portal by Medivh, which is an instance quest located in Caverns of Time. Retelling of the old relationship between Orcish shamans and the Burning Legion is also told in quest-sequence storyline.

The Burning Crusade also centers on the two new playable races and their affiliation to the gameline. Many plotholes are filled with quests that set the blood elves in with the Horde and the draenei with the Alliance. Players still have to be part of the old world quests in order to obtain lore related to Outland.

The expansion also allows previously faction-exclusive classes to be played on the opposing faction, with the inclusion of Horde blood elf paladins and Alliance draenei shaman.[2]

Each new race received its own new mount:

New mounts are also available via drop from high-end instances such as Karazhan.

Flying mounts are only usable in Outland at level 70. The Horde and Alliance have the wyvern and gryphon, respectively, as standard mounts. The epic mounts are the armored wyvern and armored gryphon.

and the mount costs 50

. Training for flying mounts requires a skill of 150 (epic mount) and brings it up to 225. The epic version of the flying mount cost 5,000

for the training and 100

to buy. Training for epic flying mounts requires 225 riding skill and upgrades it to 300. Faction reputation discounts apply to the prices.

Mists of Pandaria)[citation needed] that offers the ability to fly and has a speed equivalent to a normal flying mount.[4] Druids may obtain a quest at level 70 to obtain an epic flight form[5] or wait until level 71 to train it without doing the quest chain. Purchasing riding skill 300 is a requirement for the quest.[6]

In the expansion, Blizzard added five to six new spells for the 60-70 level range to each class in order to round out the classes better. The talent trees were also greatly expanded and revised. All classes have additional talents leading up to a 41 talent point ability.[7] Players gain new spells at every level from 60-70 instead of every two levels.

Since the Paladin and Shaman classes are no longer unique to either faction, Blizzard added new abilities to each class to make them what they truly feel they should be: Paladins received a long-awaited spell, Righteous Defense (a long-range, mass taunt-like ability, like the Death Knight's Dark Command); and Shamans received the spell Bloodlust (a long-cooldown, powerful buff) to complement their DPS and utility roles.[8]

With the release of The Burning Crusade, critical strike, defense, hit rate, spell critical, and dodge stats as well as a new stat, resilience, changed from being absolute percentages to ratings, with each player level requiring more rating points to achieve the same absolute percentage.[9]

The blood elves have two new starting areas located in the Eastern Kingdom:

Similarly, the draenei have two starting zones off the west coast of Kalimdor:

The expansion heralds the addition of Outland, an entirely new continent/world, reachable through the Dark Portal in the Blasted Lands and portals in several major cities. Interactive maps and otherwise detailed maps are available for use.[10][11]

The expansion has added several dungeons, most with separate wings to make runs faster, including some in both in Outland and Azeroth. The dungeons contain a plethora of new equipment including Tier 4 , Tier 5 and Tier 6 armor pieces.

All future raids will now have caps not exceeding 25 players (older raids will remain at a 40 player cap, at least for now). This was done to allow a greater number of players to participate in epic raids, and to allow more flexibility in the design of encounters.

Jewelcrafting allows the crafting of rings, trinkets, necklaces and special jewels that can be used in specific items, called Socketed Items.

For professions, the expansion adds a new level past Artisan (300) called Master (375). This can be maxed to 390 for gnomish engineers, draenei jewelcrafters, tauren herbalists, and blood elf enchanters.

Characters are also able to take advantage of new specializations within each profession as well as many new recipes, enchantments, patterns and schematics.

Eye of the Storm

A new battleground called Eye of the Storm is based in Outland. The battleground features a mix of holding territory and capture the flag styles of gameplay. Each team has 15 members ranging from levels 61-69, and 70 in it's own bracket.

Following the introduction of Arena PvP, level 70 players are able to win prizes in these matches. The rewards for the arena are on par with even the most powerful PvE rewards. There are currently three Arenas: The Ring of Trials in Nagrand, the Circle of Blood in Blade's Edge Mountains, and the Ruins of Lordaeron, above Undercity.

Contrary to the popular belief that Blizzard brought back none of the original voice actors, actually almost half of them were brought back.

Kil'jaeden's and Magtheridon's voice actors weren't brought back, probably for their minor roles in Warcraft III (with Magtheridon just having two quotes[15] and Kil'jaeden appearing only in two interludes[16][17]).

The Burning Crusade received four major content patches. The patch release schedule is radically different from the original World of Warcraft - content is introduced in large chunks, and balancing fixes are often added as separate minor patches between the content patches. 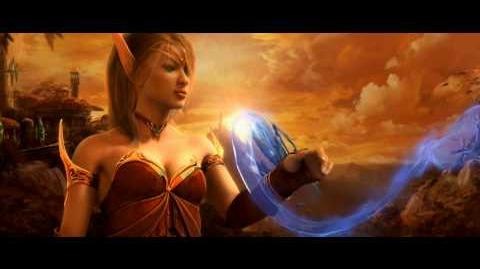 The Burning Crusade product site (US)

WoW Official Game Site (US) The Story of Warcraft > World of Warcraft: The Burning Crusade

WoW Official Game Site (US) World of Warcraft and The Burning Crusade -- Together at Last! by Blizzard Entertainment, Jun 28, 2011 3:28 PM PDT

WoW Official Game Site (US) World of Warcraft and The Burning Crusade – Together at Last! by Blizzard Entertainment, 29 Jun 2011 12:52 UTC