The Black Prince
The Dragon
The Beast

Wrathion, otherwise known as the Black Prince, was thought to be the only Black dragon who was never corrupted by the Old Gods. After Deathwing's defeat by adventurers, Wrathion is one of the few black dragons still alive. He assists rogues in helping them create the ultimate daggers, Fangs of the Father.

Rheastrasza, a member of the Red Dragonflight, sought a way to free the Black dragonflight of its madness. Capturing the black dragon Nyxondra, she forced her to lay eggs, hoping that one of them, combined with the Eye of the Watchers would hatch uncorrupted. After finding one egg that was deemed worthy for her experiment, she constantly traveled from place to place so that no one from the Black dragonflight could find her. She was eventually hunted down and killed by Deathwing himself, who destroyed the egg. But unknown to him, the egg he had just destroyed was in fact Rheastraza's own egg. Hieronymus Blam hid the egg and gave it to the Red dragonflight in Vermillion Redoubt, from which it disappeared soon afterwards.

Rogues setting off to destroy Deathwing will be sent to Ravenholdt Manor, where they witness the hatching of the egg, and Wrathion's birth. He knows of what happened when he was still in the egg so he asks to be left alone. His left-hand man, Fahrad, captures a red dragon in disguise, but Wrathion spares him and tells him to send a message to the red dragons. However, he tells Fahrad to break his legs.

After finding the needed items, the player goes back to Ravenholdt, only to discover that a mighty battle has just taken place, and the scene is littered with the bodies of dead dragons. Wrathion (who is the only participant still alive) rewards the player the Fangs of the Father, two legendary daggers empowered by the black dragonflight. He then tells the player to slay the last corrupted black dragon, who is no other than Fahrad. After killing Fahrad, he then bids goodbye to the player, hoping they both will be on the same side in the future.

In the Mists of Pandaria expansion, Wrathion can be seen residing in the Veiled Stair zone, in the Tavern in the Mists.

Wrathion, being a powerful black dragon, predicts that a great threat is coming to Azeroth, eventually revealed to be the Burning Legion. Wrathion recruits heroes of the Horde and Alliance to win his aid in allowing one of the factions to defeat the other, uniting Azeroth under their rule, which Wrathion believes is necessary to withstand the Burning Legion.

As the war between the Horde and Alliance progresses and both factions war with the Mogu, Wrathion continues to provide aid to worthy heroes, crafting powerful items to aid players and uncovering ancient secrets.

After the Alliance and most of the Horde unite in overthrowing Garrosh Hellscream, Varian Wrynn allows the Horde to choose a new Warchief and strikes a peace. Wrathion is outraged and reveals that while he had initially backed Garrosh and the Horde, he had now been betting on the Alliance, hoping that Varian would pursue a war and unite the Horde and Alliance through force. He leaves, but not before vowing that he will protect the world against the Burning Legion at any cost.

In Spires of Arak, inside a chest at Admiral Taylor's Garrison is Admiral Taylor's Garrison log. The log reveals that Wrathion arrived at the garrison on the 12'th day of the expedition as a fugitive of the Alliance. He was welcomed as a "guest", but was to remain under house arrest and guard at the garrison. Shipments arrived at the garrison over the following days as gifts from Wrathion, which helped build an inn. At this time, Taylor asked the guards to maintain a constant watch on Wrathion, but they admitted that Wrathion had paid the guards to keep an eye on Taylor himself. Almost a month into the expedition, Taylor returned to the garrison after a week away to find the garrison in Chaos, Ephial in charge and Wrathion had disappeared, taking several followers with him.

In Chapter IV of the Legendary ring questline, just before the player confronts Cordana Felsong as part of the quest:

[100] Darkness Incarnate, Wrathion can be seen briefly (in the form of a black whelp) outside of Khadgar's tower in Zangarra. 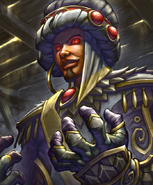 Wrathion awaits a hero inside the Tavern in the Mists. 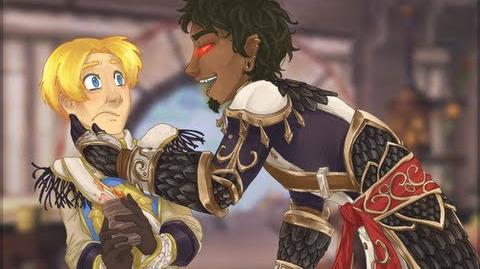 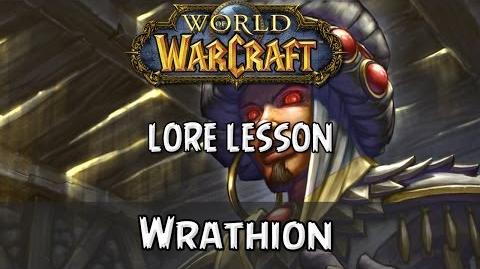