The Goat
The Prime Evil
The Beast

Power of the True Horde
Old God of Seven Heads

Underneath Vale of Eternal Blossoms (formerly), Siege of Orgrimmar (Patch 5.4)

Y'Shaarj (pronounced Yah-Sha-Raj) is the Old God of Seven Heads, one of several malefic beings that were sequestered by the Titans during Azeroth's primordial ages. Located in what is now Pandaria, the mantid race worshiped his seven heads. The Titans slew Y'shaarj, but with his dying breath he cursed Pandaria by infesting it with "shadows of his former self".

The mantid seem to believe Y'Shaarj may return someday, and if so, they will ally themselves with him.

The official title of Y'Shaarj is "Rage Unbound", which is the nickname rumoured throughout Azeroth.[citation needed]

He is voiced by Frank Welker.

The Fall of Y'Shaarj

As the battle between the titan-forged and the Black Empire waged across primordial Azeroth, the Pantheon became concerned that their forces might be overwhelmed by Y'Shaarj. Aman'Thul himself intervened, grasping Y'Shaarj's body and tearing it from the surface of Azeroth. Although this killed the old god by tearing its body apart, Y'Shaarj's tentacles had bored deeply into the crust of Azeroth. This inflicted wounds upon Azeroth itself, causing arcane energy and the lifeblood of Azeroth to flow out across the world. This irreversible damage was not enough to destroy Azeroth, but it became apparent the remaining Old Gods could not be killed in the same fashion, as the resulting wounds would destroy the world.

Eventually, after the remaining old gods were imprisoned, the titan-forged labored long and hard, creating magic wards around the wound to prevent the volatile energy from leeching out and consuming Azeroth over time. The result of their labors became known as the Well of Eternity.[1]

The Heart of Y'Shaarj

Some time after the fall of the Black Empire, the titan-forged keepers of Azeroth began using the Forge of Wills to give life to Azeroth. During an expedition to southern Azeroth to install the Forge of Origination, Highkeeper Ra discovered that fragments of Y'Shaarj's corpse had fallen, scattered across the landscape when it had been ripped apart. These fragments had infused the land with evil. The largest piece was the Heart of Y'Shaarj. Ra built a subterranean vault to contain and neutralize the evil void energy which emanated from the icy heart, instructing the Mogu to keep watch over the heart and the surrounding lands.[2]

Upon reaching exalted with the Klaxxi, a faction of mantid that have turned against their queen, players may speak to Kil'ruk the Wind-Reaver who will tell them the story of the mantid's origins and Y'Shaarj.

<name>, your deeds have earned you the trust of the Klaxxi.
You are to be rewarded. Walk with me.
We mantid are an elder race. The pandaren you associate with, they are but children. They have their role to play.
Each cycle, our young swarm their walls. The pandaren slay the weak. The strong return.
With each generation, we grow ever stronger.
Before your history began, our empire was vast. We shared this world with our sister kingdoms, Ahn'Qiraj and Azjol-Nerub.
Our gods were many and powerful. We mantid worshiped the Seven Heads of Y'Shaarj.
Great was the Old One, and terrible was his wrath. He consumed hope and begat despair. He inhaled courage and breathed fear.
When the Usurpers came, the ones you call Titans, Y'Shaarj was destroyed.
His last terrible breath has haunted this land ever since, but the shadows he left behind are mere whispers of his former glory.
I tell you now because you have earned this warning.
Our gods are not YOUR gods, outsider.
If the Old Ones ever return, we mantid will once again stand by their side.
The wisest among you will do the same.
That is all that needs to be said. Come, take your reward, and remember what you have learned today.

The "Seven Heads of Y'Shaarj" possibly became the Sha, as their creation story is known as The Seven Burdens of Shaohao, especially considering that "shadows" were allegedly left behind by his demise. Kil'ruk's assertion that Y'Shaarj "begat despair" and "breathed fear" could also be references to the the Sha of Despair and Sha of Fear. Further, the pronunciation of his name "Yah Sha Raj" stresses the "sha" portion.

His seven heads may also explain why the Old Gods revere hydras such as Aku'mai, also multi-headed creatures.

The Cataclysm expansion introduced a new item, the [Puzzle Box of Yogg-Saron], which whispers to the player on each attempt to open it. While most of these whispers are thought to describe N'Zoth, one describes a "black goat with seven eyes" which may refer to Y'Shaarj due to the similar theme of seven eyes/heads. 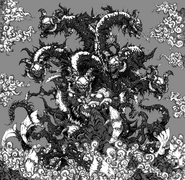