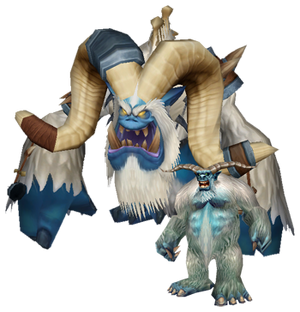 Yetis are large, furry humanoid animals that usually live in or near caves. Some of the varieties in colder regions breathe ice breath. Yetis are skinnable, unlike most humanoids. Yetis can be found in Feralas, the Hillsbrad Foothills, Winterspring, and the Alterac Mountains. They can also be found in Northrend.

Yetis are cousins to wendigos. They live in colder climates, far away from civilized communities. Yeti are far more territorial and aggressive than wendigo, usually attacking intruders on sight. A yeti begins combat with its breath weapon and then closes into melee, attacking fiercely.[1]

In the Wrath of the Lich King, the yeti of Northrend got a new more intimidating look. They also appear to be far more intelligent than the yeti of the Eastern Kingdoms and Kalimdor, with the capability of complex speech and understanding.

One notable yeti is Kun-Lai Summit's Rampaging Yeti, who, with Hozen Silverback Attackers will chase your cart in the quest Comin' Round the Mountain.