For the lore about the Old God, see Yogg-Saron.

The Prison of Yogg-Saron, Ulduar

Yogg-Saron is the final boss encounter of the Ulduar raid dungeon. It is mainly a DPS race, but also requires high situational awareness. Yogg-Saron with no keepers was the hardest boss to defeat in the game before Algalon.

The fight is lighter on healing than Mimiron, one healer per five raid members is enough. Extra DPS reduces raid damage taken.

Entering Yogg-Saron's room immediately starts the encounter. The fight has three phases, engaging Sara and her guardians first, then defeating the Brain of Yogg-Saron and finally his body. 15 minutes after the first raid member enters Sara's room, Yogg-Saron casts Extinguish All Life, which one-shots the raid.

The four Keepers of Ulduar can be activated individually by talking to each prior to the fight. Normal mode means using all four, every lower number of keeper yields an achievement. Three keepers also allows the forging of Val'anyr, Hammer of Ancient Kings. Extra loot drops when using at most one Keeper (usually Thorim).

Each Keeper present increases character size and damage done by 10%. On top of that, the Keeper's individual abilities are:

Throughout the encounter, players have a buff stack called "Sanity", which starts at 100.

Players with 0 sanity must be killed quickly, and cannot be rezzed.

Sara cannot be attacked directly, and casts the following spells randomly on the raid and the Guardians:

Sara is stationary in the center of the room. The only way to damage her is the AoE damage from dying Guardians (see below). Green-yellow clouds move in a circular pattern through the room (always the same path at the same speed), but they are faster than it seems. When players (not pets or totems) touch a cloud, a Guardian of Yogg-Saron spawns. This must be avoided at all cost. The golden rule of this phase is to immediately stop everything if a cloud comes close, and move away to a safe spot. 5 seconds DPS / Healing lost doesn't matter at all, while an extra Guardian means a substantial increase in difficulty. As with many such rules, it sounds simple, but actually doing it requires high situational awareness from everybody, and leads to many failures.

Guardians also spawn automatically at an increasing rate, starting at about one per 40 seconds, increasing up to one per 10 seconds. Since 8 Guardians have to be killed close to Sara in order to end the phase, it may be practical to cause one (or even two) voluntary extra spawns early in the phase - this reduces the number of Guardians left over at the start of phase 2. It is ok to have 2 Guardians up after the transition, 3 is still possible, 4 is a likely wipe.

Shadow Nova is the only way to damage Sara. Eight Guardians have to be killed close to her to start the next phase.

Dark Volley should be interrupted.

The safest method is to have one tank in the center of the room, a small ranged group (3-4 damage dealers plus one healer) within range of that tank and the majority of the raid at the outer edge, near the door, where it's safe from clouds. The offtanks bring Guardians to the raid where they are nuked down to about 25% (don't use DOTs). Then, the offtanks bring the Guardians to the tank near Sara, who taunts them. When the Guardian is close enough to Sara, the small ranged group kills it. It's possible to have the tanks trade places (and not taunt the Guardians). Taunt can be resisted, but is reduces the distance which the tanks have to move through the clouds.

This method is fairly safe, because only the tanks and the dedicated ranged group must dodge clouds. Unfortunately, DPS output is low. For this reason, it's hardly ever used in 10 player or hard modes, but it's normally used by 25 player groups learning the encounter.

The normally used method is to put tanks and melee on top of Sara (tanking and killing Guardians there), while ranged and healers move around the outside. This method increases effective DPS on the Guardians, but requires everyone in the raid to dodge clouds.

Phase Two: Tentacles and the Brain

The tentacles should all be killed as quickly as possible.

Everybody capable of doing so must dispel the debuffs from the Corruptor Tentacles. They do not deal melee damage, and should be interrupted and stunned while being killed by melee.

Melee damage dealers should generally stay away from Crushers. One melee damage dealer should carefully hit the Crushers regularly, to disrupt their damage reduction cast (but not too frequently, so they don't gain the damage increase buff).

Constrictor Tentacles randomly pick up players from the raid. Victims may continue to cast, and are freed by killing the tentacle. They do not cancel or prevent Druid ShapeShifting anymore. ( 3.2.2 )

She spams Psychosis without pause on random raid members unless she casts something else. The other three abilities each have a 30 second cooldown, and are used randomly when available.

Brain Linked players get a linking beam between them which is red when they are too far apart, and yellow when they are safe. Entering a portal ends Brain Link.

60 seconds into phase 2, and then regularly after 80 seconds (=20 seconds after the preceeding portal phase), Yogg-Saron emotes: "MADNESS WILL CONSUME YOU!" and opens portals into the Mind's Eye (4 for 10 players, 10 for 25). They spawn in equal distances around Yogg-Saron's body. Each portal can be used by only one player, and they despawn after a rather short time. Using all the portals quickly and efficiently is the key to this phase.

Since ranged are more effective outside, mostly melee DPS should enter. In 25 player, one healer should also join. The assigned players should make sure their sanity is high enough. It's a good idea to pre-assign portals, so that players can move to the portal spawn points before they actually appear.

Inside: The Mind's Eye

After the portals are open, Yogg-Saron's brain starts a 60 seconds cast of Induce Madness, which turns everybody in the Mind's Eye insane upon completion.

After passing through the portals, players enter one of three possible illusions. Each of them is a circular room with a door to the brain room right at the spot where players enter. The door is blocked, in order to open it, the Influence Tentacles in the first room need all to be killed. Additionally, laughing skulls float around. Characters looking at one of the skulls are affected by Lunatic Gaze (a purple beam) and lose sanity. To avoid this, players should look towards the outside wall of the room, and strafe. Use the camera controls to look around; don't physically turn your character.

After entering the brain room, players should look for the portal back outside near the rear wall. It's a good idea to stand next to that portal before nuking the brain. When about 5 seconds are left on the Induce Madness cast timer, quickly use it.

Phase Three: The Head of the Beast

Heroic 3 Keepers or Less Only:

Note: the epic music and voicework that begin when the phase is initiated are worth turning on game sounds at least once.

When phase three starts all tentacles left over from phase 2 remain active. Therefore, no Crushers must be up - some communication is needed, don't kill the brain until all Crushers are dead. A few Corruptor Tentacles can be ignored as long as the debuffs are dispelled.

Phase three ends when Yogg-Saron dies. Yogg-Saron has no aggro list and is unable to move.

Players should stand near near the green pillars if Freya is helping to be able to restore sanity. All healers should face away from Yogg-Saron at all times. The caster camp is best located about 20 yards away from the melee camp. Melee DPS can get knocked back by Yogg-Saron if they run into his body.

Lunatic Gaze is used every 12 seconds, it creates purple beams between Yogg-Saron and the players facing it. Healers should turn away the whole time, tanks and DPS should get into the habit to regularly turn away.

Yogg-Saron spawns (and heals) increasing numbers of Immortal Guardians, which eventually kills the raid. Ranged DPS should focus on Yogg through the whole phase, while melee and tanks deal with the Guardians. Melee may require help from ranged on the Guardians.

If the raid is using three or fewer Keepers in 25 player mode Yogg-Saron emotes, "Yogg-Saron opens his mouth wide!" while casting Deafening Roar (about once per minute). This is the cue to throw the [Shattered Fragments of Val'anyr] into Yogg-Saron's maw to recover the [Reforged Hammer of Ancient Kings] upon his defeat. Deafening Roar is best dealt with by Holy Paladins rotating Aura Mastery with Concentration Aura up.

Yogg-Saron spawns Immortal Guardians every 10–15 seconds. These have to be picked up by the tanks and DPSed down quickly. At full health, they hit a well geared tank for 25k, when their health deceases, so does their damage output.

Immortal Guardians can only be killed if Thorim is helping. Without him, they need to be tanked through the whole phase. Every 45 seconds, Yogg-Saron marks one or more Guardians with Shadow Beacons. 10 seconds later, it launches shadow missiles at the marked Guardians. Upon impact, the missiles explode and give the Empowering Shadows buff to all Guardians and Yogg-Saron within 20 yards. This means that at the moment when the missiles are launched, all marked Guardians must be 20 yards away from Yogg-Saron, else it gets healed. The healing Guardians receive can be reduced by a rogue with Wound Poison and Fan of Knives.

To keep the Guardians at low health (and thus at low damage output), they should be tanked in a tight group near Yogg-Saron, so that one or two ranged DPS can AoE the Guardians and Yogg-Saron. When the Guardians get beacons, they must be quickly dragged away until the missiles explode, then they can be brought back.

The Tortured Champion vision:
The Forging of the Demon Soul vision:
The Assassination of King Llane vision:

The following achievement is given to the first raid group on a realm to defeat Yogg-Saron on Heroic difficulty without the help of any keepers. 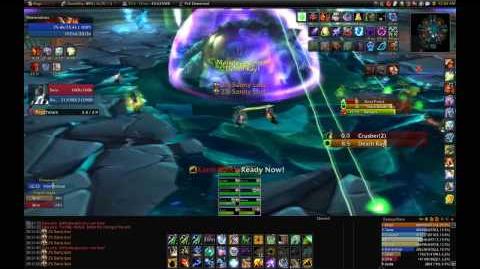 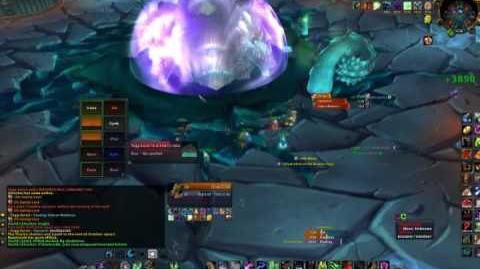 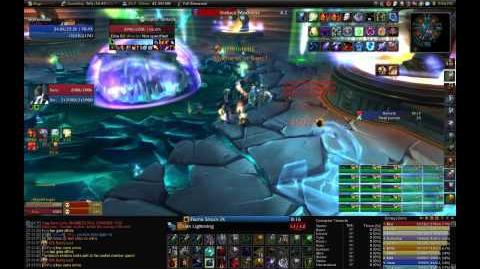 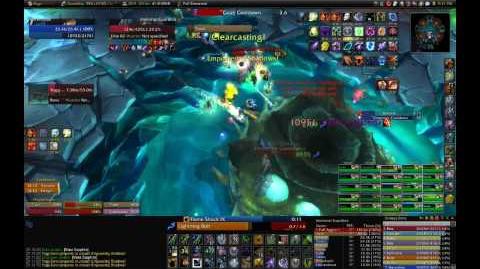 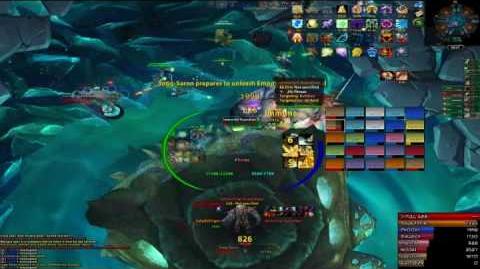 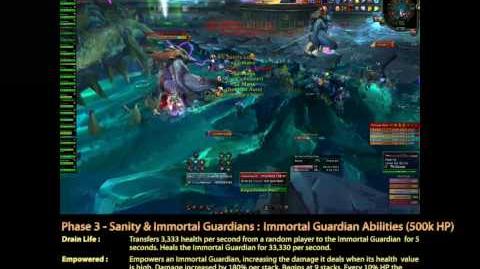 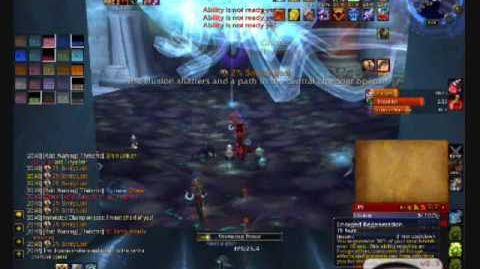 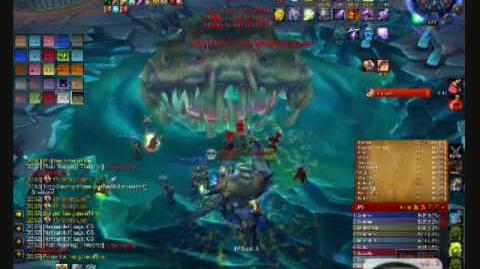 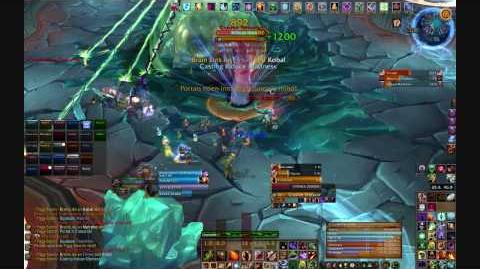 Yogg-Saron with game sounds and voiceovers 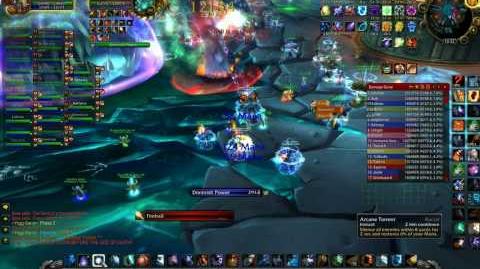 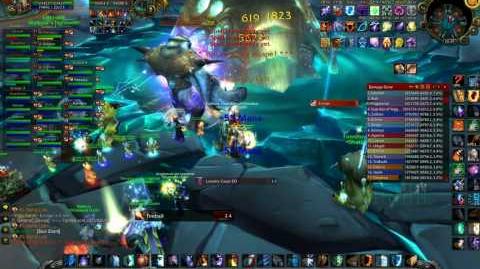 YouTube FTW Yogg-Saron 10man (One Light in the Darkness) + Commentary