Were you looking for the article on the naga sea witch?

Goddess of the Underworld Minions

Zar'jira <The Sea Witch>, known in Warcraft III as Sea Witch, was a goddess that the Underworld Minions, including a band of murlocs, worshiped on the Darkspear islands in the Maelstrom prior to Thrall's destruction of their cavern of worship. She was a powerful naga spellcaster who had used magic to gain the murloc followers.[1] 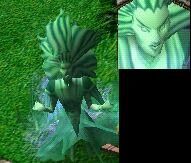 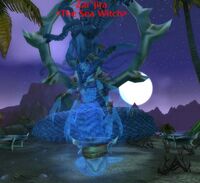 The Sea Witch demanded regular sacrifices from her murloc worshipers, which led them to capture visitors to their island chain. Thrall, his soldiers, the Darkspears, and Kul Tiras Marines were captured by her followers to be sacrificed.[2] The Horde and Darkspears managed to escape due to Thrall's efforts, though they lost Sen'jin. The Kul Tiras soldiers weren't so lucky.[3] Afterwards, Thrall managed to hold back her followers and escape on the boats. Afterwards, the volcano on the island began to erupt — which started the sinking of the island. Thrall's forces and the remaining Darkspears quickly repaired their ships as they held the line against attacks. They successfully escaped, and as they left, the Sea Witch taunted Thrall that the "Dark Tide" would soon claim him.[4]

On the official Cataclysm site, it is mentioned that there is a sea witch on the Echo Isles.[5] Questing in the zone reveals that this is Zar'jira, the same Sea Witch who appeared in Warcraft III, has come back to claim her revenge. The fight to vanquish her involves Vol'jin and multiple "phases".[6]

She is an intelligence-based ranged hero with Brilliance Aura, Water Elemental, and Earthquake. She is resurrected at the murloc Altar of the Deep.