Were you looking for the 5-man, level 85, heroic mode dungeon introduced in Patch 4.1, see Zul'Aman or lore about the troll city, see Zul'Aman (lore)?

is a 10-man raid dungeon located in the Ghostlands. Although it requires no attunement and is intended to be more accessible to players on tight schedules, it was designed to be more difficult than Karazhan and with better loot.[3] In fact, the first bosses in ZA require Kara-level gear, while the later bosses need significantly better - even Tier 5 equipped groups don't consider this a walkthrough. Since the instance contains only six bosses, it indeed requires less time than a Karazhan full clear.

The instance involves players fighting four avatars of the forest trolls Loa: the bear, eagle, lynx and finally dragonhawk. These Loa have been channeled into the bodies of four troll warriors. After defeating the four Loa aspects, players face off against the witch doctor that called on the Loa, and finally against Zul'jin himself. The final troll boss will not only be a powerful foe; he's also able to draw upon the ghostly spirits of each of the four liberated Loa and change his own shape to access their powers.

The instance has multiple quest givers outside the entrance for events that occur inside, including time-sensitive missions (e.g. rescues) that offer differing rewards based on how quickly the task is accomplished.[4]

Though the Ghostlands region is technically a Horde territory (blood elf, to be more specific), the area around Zul'Aman is considered contested.

Geography (according to RPG)

Zul'Aman is a temperate forestland of towering trees, dark shadows and ancient ruins and ziggurats. These ruins and odd, stepped pyramids remain from the days of Zul'Aman's empire, but they could be much older. They may be Titan or Old God remnants. Elevation rises toward the north, and a hilly region dominates the Quel'Thalas border. The mighty Greenrush River begins in Zul'Aman's Lake Abassi and exits the region in the southwest.Zul'Aman is the capital of Amani empire where located in the tail of Amani Pass.

Primitive forest troll settlements are scattered throughout the zone. Weathered ruins hide among the trees, covered with vines and the dust of ages. Trolls guard treasure and captives, and ancient ruins of indeterminate origins dominate forest clearings. Bands of high elf refugees avoid destruction at troll and undead hands.[2] (LoC 115-118)

See Zul'Aman timed event
The first four bosses in the zone each have a hostage NPC. Upon entering the instance, a timer starts. When it runs out, all remaining hostages are killed. When a hostage is rescued before the timer runs out, it opens a chest with extra loot, and adds some bonus time on the timer. The feeling is quite similar to the infamous 45-minute Stratholme runs (

[60D] Dead Man's Plea) in original WoW. Since the first four bosses can be attempted in any order, there's some leeway for raids to choose a matching boss depending on competence and group make up.

Nalorakk, the Bear Lord is the easiest fight in Zul'Aman. He's a fierce creature the size of a Zul'Gurub berserker with the head of a bear. The encounter is still pretty complex: As the raid makes its way up to the boss's platform, Nalorakk sends waves of trash mobs to attack the party, the last of which consists of trolls mounted on bears accompanied by two trolls. You cannot initiate combat with Nalorakk until these last four trash mobs are dead. During the fight, Narolakk alternates between his troll form and a bear form.

The eagle-headed Akil'zon in the north-western corner is the second-easiest boss and most raids attempt him next after killing Nalorakk. This boss sends waves of non-elite eagles against the raid as they engage elite trolls on the way up and fend off elite trolls from the flank (Akil'zon gauntlet). The boss fight requires some attention and skillful maneuvering by the entire raid, but after some learning is rather easy to master.

Next up: Jan'alai, the Dragonhawk hybrid. The path to him is rather uneventful (when compared to the first two bosses), still packs of fierce trolls and patrols calling for reinforcements offer some challenge. The boss fight itself has an interesting twist. On two pillars, two lairs of dragonhawk eggs are located. If the eggs are smashed, adds spawn from them. During the fight, the boss periodically summons hatchers to smash the eggs. Although it's tempting to kill the hatchers as soon as they spawn, it's better not to do so and let them crush some eggs, because when the boss' health reaches 35%, he spawns all remaining eggs. Besides this, the boss regularly throws a lot of bombs, which the raid has to learn to avoid.

The last of the Loa inflicted trolls is Halazzi the Lynx Lord. He is a very hard-hitting melee/shaman based boss. There's not a lot of fancy tactics, it's mostly a gear check for the tank and healers. With Kara/Gruul gear alone, this fight is very difficult, and at least some SSC/TK/ZA gear is recommended.

After the four Loa are all defeated, the way to the inner sanctum opens up, leading to Hex Lord Malacrass and the big man himself. Malacrass earned his lofty title by weaving the dark magic that enslaved the Loa , but alas, his in-game representation is as inert as the lynx and eagle lords'. The trash mob groups leading to him require some skill to master, and the boss himself needs very good interrupts. Besides dealing large amounts of AoE damage to the entire raid, he frequently casts heals which must be interrupted by all means.

The end boss of the instance is Zul'jin. The fight consists of five phases, while the boss shifts through all of the Loa encountered before. Each of the phases requires a different tactic, a key to success is survival — all raid members must learn what to do in each phase. To bring him down is the crowning achievement in any Zul'Aman run, the instance is clear!

The Zul'Aman quest chain starts in Lower City in Shattrath, but can also be started near the instance entrance (missing out on 75 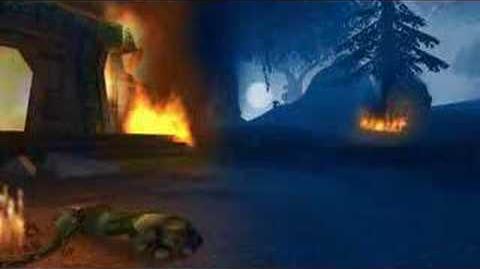 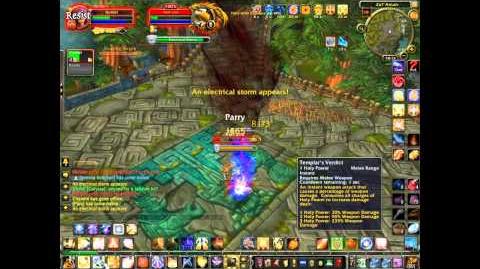 Edit to the right of the section title.
Community content is available under CC-BY-SA unless otherwise noted.
Advertisement