Northeastern Northrend
Zul'Drak is an area located in eastern Northrend. It is home to the Drakkari ice trolls and their Frost King Malakk as well as the smaller trolls of the Winterfang tribe. Their capital is the city of Gundrak. Zul'Drak belongs to the Drakkari, who roam in hunting parties searching for prey. Old troll ruins are strewn across the countryside and the Scourge hovers just beyond the western border, waiting for a chance to strike. Climate-wise, Zul'Drak is the least pleasant of the eastern regions. It's colder than the Grizzly Hills or the Howling Fjord, less majestic than the Storm Peaks, and more crowded than any of them - with most of the crowd being Drakkari. Most other races avoid this region, and for good reason. Travelers do not need to go there for passage north or south — they can stick to the Grizzly Hills, which surround Zul’Drak on both sides and reach all the way up to Crystalsong Forest and Storm Peaks. The only reason anyone would want to visit Zul'Drak is if they were explorers hoping to meet the Drakkari — and they better have a large group of armed warriors with them when they do.[1]

The Drakkari have recently gone mad after they sacrificed their Loa animal gods in an attempt to fight off the Scourge. The Argent Dawn has returned to play a role in Zul'Drak as have members of the Zandalar tribe, who have come to try and save some of the Drakkari history before it is wiped out. The zone itself is a giant ziggurat of the now broken civilization.

As noted below, players visiting the zone will find that it is in the process of being overrun by the Scourge, particularly in the vicinity of the Argent Stand. The conflict between various NPC/mob factions can be intense, and it's easy to get caught in the crossfire.

The zone's primary inhabitants are Scourge, Nerubians, crazed Drakkari who randomly attack anyone in their path, and a scattering of Water Elementals which a faction of Drakkari summoned to help them defeat the Scourge. The Argent Dawn have a tangible presence in the area as well. A number of the Loa of the Drakkari still exist in weakened forms, and can be found in the northeast region of the zone, towards Gundrak. A Scourge-controlled Blight zone also exists south of Ebon Watch, near Drak'Tharon Keep, at the east end of the zone.

The Drakkari ice trolls are an old race, one of the first in Northrend. They were building homes in Zul’Drak before the Great Sundering and never left their home, though some of them may have migrated south to became the Frostmane tribe and the Winterax tribe. The furbolgs of Grizzlemaw have fought the Drakkari for many years.

Drakkari are tribal, and early in their history each tribe established its own territory and fought off any trespassers. Then one tribe conquered another and enslaved its warriors. These slaves were forced to build the victors a new and larger home, and their children became part of the dominant tribe. This tribe continued to conquer its neighbors, each time absorbing them, until finally it was powerful enough to claim all of Zul’Drak as its kingdom. Any tribe that resisted was destroyed. Those tribes that accepted the powerful tribe’s dominance were allowed to keep their own territories, provided they accepted any orders from the ruling tribe. Thus, the Drakkari nation truly began. The central tribe’s home became Gundrak, the capital city. The tribes still war among themselves, and the Frost King allows this because it keeps his people strong and aggressive. He coordinates border patrols and establishes protocols for calling all the tribes together should an army attack them in force. Many tribe chieftains thought these efforts foolish until they encountered the walking dead. Then the Frost King organized the other Drakkari and drove the dead from their lands. Thus far, the Scourge has not penetrated into Zul’Drak to any degree, though it claims Drak'Tharon Keep, an old Drakkari stronghold in the Grizzly Hills just beyond Zul’Drak’s southwest edge.[2]

Zul'Drak is the Drakkari homeland. Their culture is believed to have existed long before the Great Sundering, and live here by the thousands. It’s amazing this one land can support so many trolls, especially since fresh meat is their principal food. Fortunately for them, wild beasts roam the area as well and provide plenty of prey. Drakkari are unpleasant. They epitomize the nastiness and barbarism of trolls everywhere. They’re large, bigger than any other troll (except trolls of the Zandalar tribe, the first tribe to exist and who are the same size) and crude, and they prefer violence to discussion or negotiation. They are a barbaric people who practice voodoo and worship strange spirit-gods and devour their enemies — and sometimes their friends — raw. The only thing a Drakkari respects is strength and the only thing they want from others is fear and flesh. Fortunately, Drakkari are tribal. They live in small tribes throughout Zul’Drak and wage war among themselves. Some bands of Drakkari slaughter each other simply because they met along the border between their two tribes. Such conflict helps keep the troll population down. No one else is foolish enough to share the region with them.[3]

Zul’Drak is a single large valley between the arms of the Grizzly Hills, Crystalsong Forest, and the Storm Peaks. The trees here are smaller than the southern forests but numerous and upright, and provide excellent cover when sniping trolls. Some grass and other plants poke up through the snow, and frozen ponds and streams dot the land. Obelisks and ziggurats are everywhere, often at the centre of active troll camps. Ruins show where troll tribes must have lived long ago — most of these look like they were destroyed during battle rather than simply abandoned. The valley teems with life. In addition to the Drakkari, giant wolves, wendigo and other animals live among the trees and grass. Furbolgs wander up from the Grizzly Hills to hunt and clash with the Drakkari. The trolls maintain patrols along their border, both to drive out intruders and to kill anyone they find.

Troll villages are everywhere in Zul’Drak. Most of these are small, crude places, a handful of wood or stone buildings around a single larger hall. Some are built on the ruins of older structures or surround an ancient obelisk or ziggurat, carved from stone and more impressive than the more recent structures. The only large settlement is Gundrak, the capital city.[3] Another very impressive piece of architecture to note is the massive aqueduct irrigation system the trolls seem to have constructed, despite being renowned for their minimal interest in technology of any kind.

In Wrath of the Lich King, the zone of Zul'Drak is a massive outdoor zone roughly the size of Shadowmoon Valley.[citation needed] The entire zone is a massive tiered ziggurat.

Zul'Drak is in the middle of a massive upheaval. Scourge forces under the newly empowered Drakuru are preparing an undead army of troll chieftains empowered by blight crystals.[4] To counter the Scourge threat, the Drakkari trolls have begun sacrificing their own Loa animal gods in desperation. Meanwhile, the Argent Crusade is caught between two armies as they clash with both the Scourge and the native Drakkari trolls at Argent Stand, as the Zandalari tribe has arrived to both intervene on behalf of the gods[5] and chronicle the end of the Drakkari empire.[6]

An achievement exists called The Empire of Zul'Drak so it may be another name for the Drakkari empire.

Zul'Drak is home to several characters of note. Battling the Scourge are the Argent Crusade, led by Commander Falstaav and Commander Kunz at the Argent Stand and Crusader Lord Lantinga at Light's Breach, as well as the death knights of the Ebon Blade, led by Stefan Vadu at Ebon Watch. Having recently traveled to Northrend from the South Seas are a group of Zandalari trolls, led by Witch Doctor Khufu at Zim'Torga. From there, they seek to stop the Drakkari from betraying their Loa gods, although they might be too late. The local Scourge forces are led by the treacherous Overlord Drakuru at the necropolis Voltarus, and before heading into Gundrak, players must face off against the evil Prophet of Akali. Lastly, the Amphitheater of Anguish sees the return of famous blood sport promoter Gurgthock, his assistant Wodin the Troll-Servant, and the powerful Korrak the Bloodrager from Alterac Valley.

Drak'Tharon Keep from the Grizzly Hills side.

An interior area in Drak'Tharon Keep.

A lich performing a ritual inside a large room in Drak'Tharon Keep. 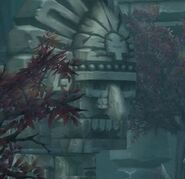 The old Amphitheater of Anguish. 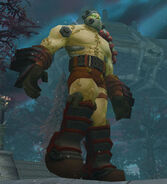 Thrym, an elite boss on the road to Crystalsong Forest.